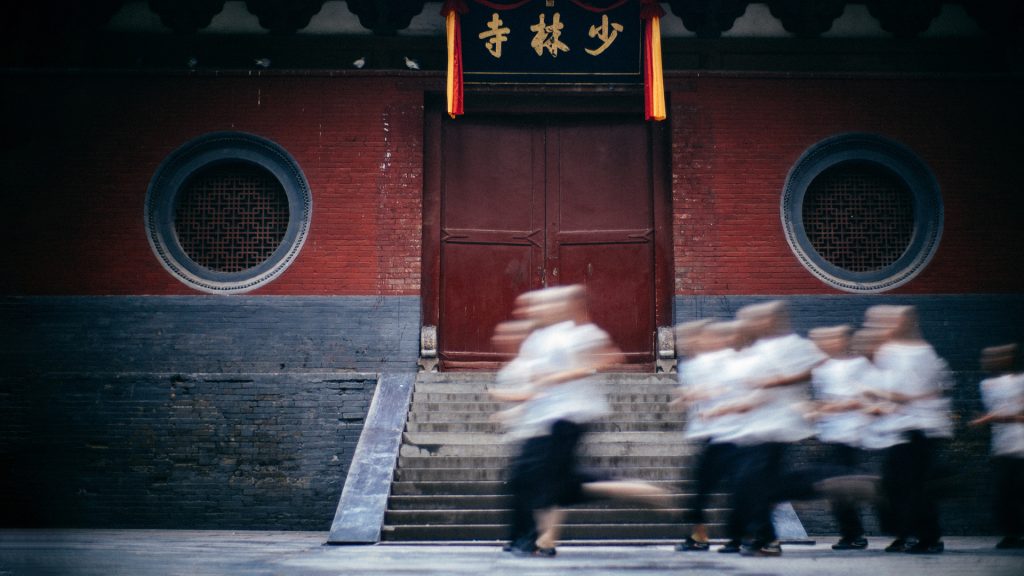 Moving meditation is a term sometimes used when speaking of karate, and in his excellent book, C. W. Nicol uses the phrase “Karate, Moving Zen” as the title. Zen is a school of Buddhism emphasizing the value of rigorous self-control, meditation, and intuition rather than ritual worship in an attempt to achieve enlightenment.

Bodhidharma and Zen in Shaolin

The story goes that a Buddhist Monk named Bodhidharma travelled from India to China to teach Chan Buddhism (more commonly known by its Japanese name of Zen). At the Shaolin Monastery, he found the monks’ physical condition not up to the severe practices he required of them in their attempts to follow his teachings in the way of meditation.

To rectify this, he instructed them in exhaustive physical training based on the martial arts he learned as a member of the warrior caste. Brought up in the warrior caste, Bodhidharma believed that once one exhausted the body, the mind would have to take over to help cause the body to go past its supposed limits.

He believed that once this level of will power was achieved, the mind would be altered and allows a far greater capacity for focus and intense concentration. It seems as far as the Shaolin monks were concerned, he was right, because they were famed for being incredibly strong mentally and apparently their focus in meditation was unequalled.

It is unlikely that Bodhidharma, who was at the Shaolin to teach Zen, would have wanted his disciples to waste their time practicing martial arts if those practices were not meant specifically improve their ability to meditate. And in the performance of the forms he taught them, he was helping them to not only improve their bodies physically, but most importantly, to improve their ability to concentrate their minds totally on what they were doing.

Surely, they were practicing moving meditation? There is another thing to take into consideration regarding the monks’ practice as taught by Bodhidharma. Would it not have included things that would have been normal to his understanding of the human body? Namely, the use of chakras (areas of the body believed to be psychic energy centres, as in chi or ki centres) and also in the importance in the use of mudra (specific hand positions said to be used to channel energy in specific ways).

That being said, surely it follows that in teaching the monks the various forms to practice, would not these forms incorporate these concepts into their actions? If you look at the hand positions in some of the older karate kata practiced today, one can see many mudra-like poses. In the system I practice, Goju Ryu, at the end of a lot of the kata the hands are positioned in the classic Buddha pose.

Now correct me if I’m wrong, but this does seem a strange way to end a fight (if that’s what the practice of kata is supposed to be all about). Perhaps, it is intended to bring into the mind things other than fighting?

Many readers might wonder what this has to do with them or the practice of their martial art. Some may have a prejudice against meditation as only for “tree huggers and naval gazers.” But they’d be wrong.

Cultivating a mind able to focus its concentrated efforts completely to remove extraneous influences is a massively important skill to have as a martial artist. In combat, it is so very easy to let the mind wander into ifs and buts, self-doubt, and worst of all, fear. Any of these negative thoughts can cripple your abilities to perform under the stress of fighting, negating all the years of training you might have had.

Think about modern athletes. They are filmed in detail to analyse every individual movement and body positions to improve their performance. They go over each tiny detail time and time again to make it just right. They use mind coaches to help them channel their minds and visualisation techniques to help them “see” how they might run their race for example.

Is this not meditation? For them, there is nothing amiss in focusing totally on every single aspect of their actions, so that in them doing what they do, everything is perfect, where success or failure might occur in a split second. Surely fighting is just so?

Karate move sets (kata) are supposed to make us in effect, meditate while performing all the many intricate moves within the various forms. Take what appears on the outside to be a very uncomplicated set of movements, the kata Sanchin. To do this properly one has to unify the mind, spirit and body totally.

In karate we try to cultivate what in Japanese is called “ikken hissatsu,” to kill with one strike. One is only able to do this when everything is just right; the mind, body and technique must be fully focused at one point. This is only possible if one’s concentration is absolute and this absolute concentration is only possible if your mind has been trained to be that focused.

With all that said, take some time to learn how to meditate. When you practice your set routines, concentrate fully on each and every single detail of the performance. It will absolutely make what you do better and more effective. But never forget: practice does not make perfect, only perfect practice makes perfect.

At MaArtial, we consider meditation as a vital part of traditional Martial Arts such as Kung- Fu and Karate. The unification of Mind, Body and Spirit is key in the cultivation of a true Martial spirit.

Practically speaking, we can fully comprehend how some Martial Artists refer to Aikido and Karate as ‘ dynamic Zen.’

The article explores this theme and we agree with the conclusion that “moving Zen” practice is just as critical as stillness in daily life.