Is karate still a relevant form of self-defense? 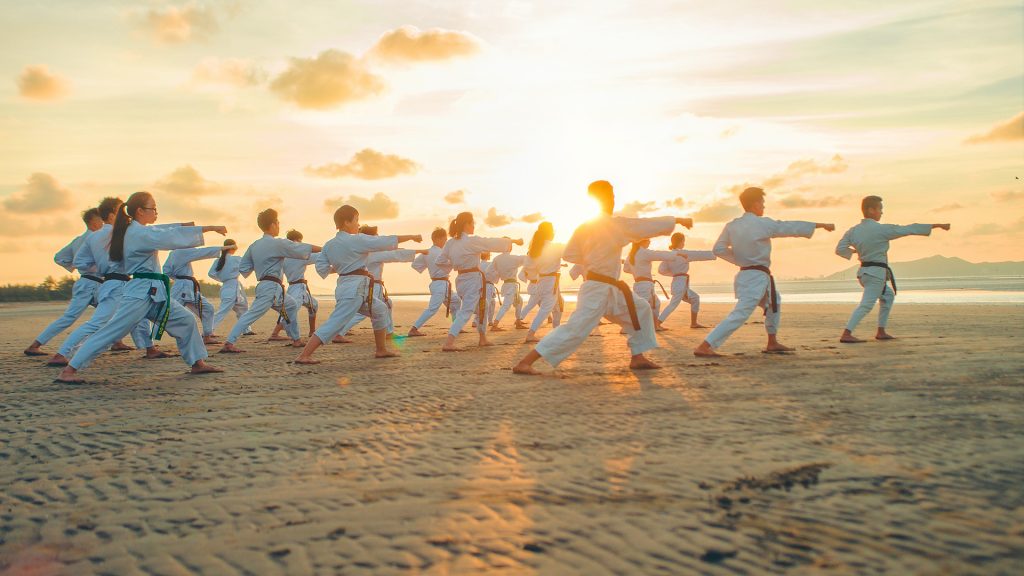 What’s the point of karate?

This question can be asked against the onslaught of “modern” martial arts and combat systems, all of which profess to be full of “street effective techniques.” To be fair, to most observers they look and feel far more “real” than karate. This misunderstanding of what karate is or is not is easy to understand, especially considering karate as it is predominantly practiced today bears little or no resemblance to how it was practiced when it first became known in the west, let alone how it was when it was originally formed.

Modern combat systems based on military training are highly effective to get raw recruits up to a reasonable standard in the short time that basic training allows. This makes them very practicable for people who want a quick fix to their needs for self-defence training. Karate, on the other hand, takes a very long time to become effective in, let alone master.

Another “problem” with karate, is its many varied types available; some, if not most of which, are not in the least bit focused on self-defence. This was not always the case.

When one reads the biographies of the people involved in the earliest days of karate it can be seen that the sole intention of karate was as an effective means of self-protection, but with the advent of popularisation of the art, sporting applications overcame martial efficacy.

So, if as stated, the myriad of effective modern combat systems are effective, why practice karate?

The practical benefits of karate

In my opinion, the practice of karate as a martial art offers the participants things that other modern combat systems may not.

Firstly, karate offers people who lack the confidence to partake in a combat system a potential means to gain confidence in themselves and their ability to defend themselves. It is much more likely that someone who appears to be unable to “handle themselves” will find themselves a target for would be attackers than someone with confidence, so the need to practice a martial art is far more vital for such people.

It is well documented in biographies of great martial artists that often the reason for beginning their training was some kind of weakness. The famous Karate master Gichin Funakoshi (often called the father of modern karate and the founder of one of the most widely practiced styles of karate, Shotokan), stated in his autobiography “Karatedo, My Way of Life”, that “I was rather a sickly baby and frail child; so it was suggested that to overcome these handicaps I ought to begin the study of karate”. The way karate was originally taught allowed one to gradually learn the skills needed for effective self-defence while gradually also making one stronger and more self-assured.

One of karate’s guiding principles is “karate ni sente nashi” or “there is no first attack in karate.” This idea that one does not initiate an attack would also appeal to those for whom learning a purely defensive martial art was what they desired.

When taught properly, karate teaches one to be able to defeat an attacker quickly and with little effort, never relying on strength but rather technique. Therefore, it is suited to all, irrespective of body size or age (providing of course that the person performing the movements is well-trained and well-practiced).

Unfortunately, that level of competency has been lost somewhat in the way karate is done. This has to do partly with the standardisation of karate, the focus on the purely sporting application. Karate has also suffered greatly from the modern ill of people wanting immediate results or rewards for their efforts. Like various coloured belts and stripes along the length of the black belt, for example.

True study of the martial arts

Of the many people who practice karate, how many can honestly say they truly study their art? Finding a teacher who has the depth of knowledge and experience to pass on the techniques as they were intended may be difficult. And almost everyone who enters into a karate dojo doesn’t really know what to expect or to look for.

“Old-style” karate, in my opinion, has it all. It teaches one effective, proven self-defence techniques. It is learned in such a way that it can also be practiced at home, which means it can be practiced more often. It relies on technique, not strength. That technical skill can be developed and improved on as one ages. Strength fades; technique does not.

When performed properly, karate techniques can be devastating. Karate practitioners of old would spend a great deal of time on the continual repetition of individual techniques to make those techniques perfect.
I would think a lot of people who practice “reality-based” martial arts, having seen or even tried modern karate, do so because they believe that karate techniques are ineffective against a real attacker. This I believe, is because those strikes they have seen are being used in the wrong application or against the wrong targets.

I often use the following thought experiment as a way of getting this point across to my students the following:

“Consider a bullet; if I threw one at you it would probably not hurt at all. It wasn’t designed to be used that way. If however, I loaded it into a gun and fired it at you, would that hurt? Probably. Would it be fatal? Possibly. If though, before firing it at you, I knew its optimum effective distance and aimed it a specific lethal target, then I could be sure it would be fatal. It’s the same for karate techniques, more often than not, they are not used for what they were designed for. Not used with the correct velocity, the distance over they are being used is wrong, or the targeting is incorrect.”

Learning to concentrate on which technique to use, how to apply it, with how much power and to what target, focuses the mind while training. You can tell when a person trained in old-style karate is performing his or her movements; each one shows purpose and commitment. It has to be with “intent”. Without this, the performance of the kata is just dancing.

Most people assume that self-defence is something one learns so that it can be used against an attacker. Although this is generally true, the likelihood of being attacked is rare (though one should definitely prepare for it). Far more likely and probable causes of “harm” to oneself are stress, illness, and injury. Karate practice can help participants to “defend” against all of these.

By practicing karate kata, all the muscles are exercised and stretched; the skeletal structure is helped by performing the correct posture needed to carry out the movements of karate effectively and learning to concentrate your mind on only what is required while breathing correctly helps to reduce stress.

Find a good teacher, practice diligently and study hard and old-style karate will benefit you your whole life through.

At MaArtial, we know that ” What’s the point?” of many martial arts or other systems, is a frequently unanswered question. The article states clearly why and how Karate can remain relevant throughout the whole of a practitioners life, providing the instructor is able to readily and patiently explain the myriad benefits of a traditional martial art in the modern arena. Often, hesitant people prefer to begin traditionally, rather than to go straight to a combat style of self-protection, which may seem too aggressive initially. As long as one knows the point of doing virtually anything, the how and when become rather easier.