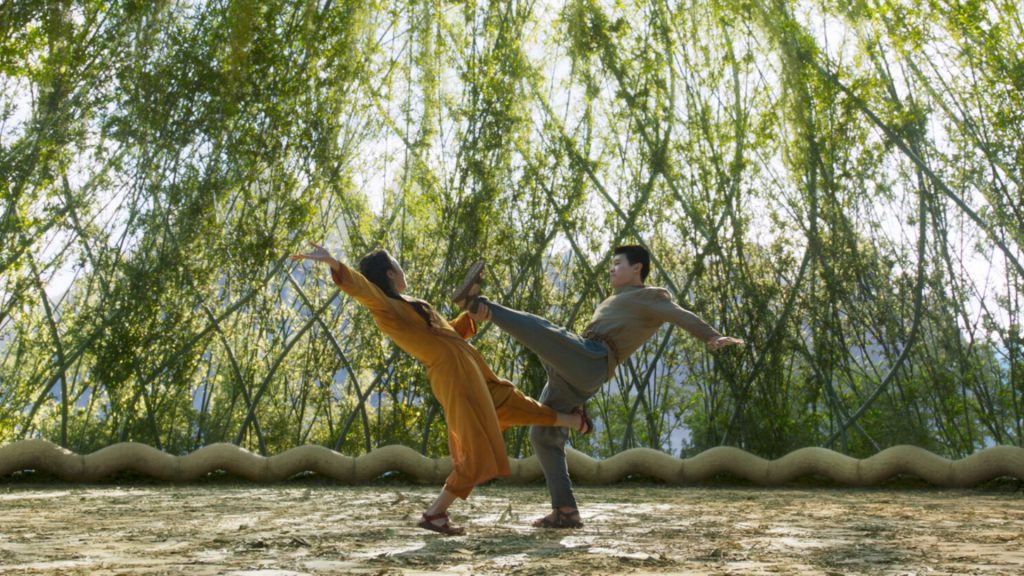 Everything you need is already inside you.

Opening this weekend in cinemas worldwide, Shang-Chi and the Legend of the Ten Rings is a different kind of comic book movie, drawing as much influence from classic martial arts kung fu cinema as it does from the superhero genre.

Martial arts moves have been widely used in previous Marvel superhero movies, most recently in this summer’s Black Widow, for which star Scarlett Johansson practiced in a variety of techniques including jiu jitsu for the movie’s slam-bang action scenes.

But while there’s plenty of kung fu throughout the movie, Shang-Chi doesn’t only bring martial arts moves to the screen: it also utilizes Shaolin principles, and especially concepts drawn from Buddhism that relate to self-mastery and building an integrated character.

Shang-Chi is Marvel’s “Master of Kung Fu,” and made his first appearance in the comics nearly fifty years ago during the height of the popularity of Bruce Lee and martial arts cinema in the United States. Originally created as the son of supervillain Fu Manchu, Shang-Chi fell into obscurity after Marvel lost the rights to his more famous father in the 1980s.

Despite making a brief appearance in other Marvel comics through the years, Shang-Chi became so obscure that even director Destin Daniel Cretton and writer Dave Callaham, themselves lifelong Marvel fans, had never heard of the character before being hired to make the film. But this also gave the filmmakers some creative freedom in reinventing Shang-Chi for the big screen while staying true to his roots.

In the movie, Shang-Chi (played by Simu Liu) is the son of Wenwu (Tony Leung), an immortal villain who trains his son to be a remorseless fighter from a young age. His mother Jiang Li (Fala Chen), a guardian of the mystical Ta Lo forest, attempts to cultivate his good heart. And sister Xialing (Meng’er Zhang) is someone to whom Shang-Chi made a promise that he failed to keep.

The opposing forces that pull at Shang-Chi during the film – both inner and outer – nicely parallel the concept of the Trikāya in Mahayana Buddhism: the three bodies that make up a complete whole for a person who has attained nirvana.

In Chan Buddhism, the Chinese school of Mahayana practiced by Shaolin monks, the three forces are more abstract concepts that reflect the forces of light and shadow within a person. In Tibetan Buddhism, they are expressed as the more easily-understood Three Vajras of mind, body, and speech.

Despite the action-filled narrative of Shang-Chi and the Legend of the Ten Rings, the primary struggle in the movie takes place within the lead character himself. Shang-Chi is only able to complete his journey of self-discovery, and become a Marvel superhero, after he understands that these opposing forces are integral parts of who he is, and learns how to balance them to reach his full potential.

You are a product of everyone who came before you. The Light and the dark. The legacy of your family.
— Ying Nan (Michelle Yeoh)

There’s a lesson for us in Shang-Chi as well: Who we are is not just we we do, what we think, or what we say, but rather a combination of the three. Finding the right balance is a vital step in self-discovery and building our personal integrity.

Shaolin Master Shi Heng Yi recently gave a TEDx Talk about the hindrances to self-mastery, and discovering the need for balance in order to progress.

“The universal law of being successful and happy at the same time means finding the balance,” he says.

The Shaolin Temple in China is not only the birthplace of Shaolin Kung Fu, but also Chan Buddhism. Most associate Shaolin with intense kung fu training, but Buddhist principles are just as important to a kung fu practitioner. Shang-Chi does a nice job of reminding us that there’s more than martial arts skill behind the Marvel superhero.

Unlike Shang-Chi, you don’t need to become a Shaolin master to find your own balance in life. Doing a quick self-visualization can help you better understand how you act and react in certain situations, and find a balance between the different aspects of your inner self.

Start the exercise from a relaxed and calm position. Close your eyes, and imagine yourself getting up and walking to the center of the room. Look at yourself as an observer watching you interact with other people.

By taking a moment to view how we act in different scenarios, we are helping ourselves better understand what motivates us, and how we might act differently based on external factors. Like Shang-Chi, the key to building our integrity and finding happiness and success is understanding the forces that drive us, and finding the right balance between them.